What were your expectations of the One Day Film School and did it meet or exceed these?

I had heard lots of good things about the One Day Film School as we have used them in the 6th Form for many years. I was slightly wary that it would be quite time consuming for the teachers, but in fact, the boys got on with the tasks themselves and far exceeded my (already high) expectations.

Yes it was different – a real opportunity for the pupils to work closely together in teams despite their physical distance. They were also able to work on their creative skills and enjoyed the independence given to them.

The year group absolutely loved this task. Every group produced a film, and most importantly had enjoyed shooting it, editing it and the whole process. There were a number of excellent films at the end of it!

Yes – each form group watched all of their films and then voted on their favourite. The boys were really complimentary about each other’s work.

About City of London School

The school was founded by a private Act of Parliament in 1834, following a bequest of land in 1442 for poor children in the City of London. The original school was established at Milk Street, moving to the Victoria Embankment in 1879 and its present site on Queen Victoria Street in 1986.

The school provides day education to about 900 boys aged 10 to 18 and employs approximately 100 teaching staff and around another 100 non-teaching staff. The majority of pupils enter at 11, some at 13 and some at 16 into the Sixth form. There is a small intake at 10 into Old Grammar, a year group consisting of two classes equivalent to primary school Year 6. Admissions are based on an entrance examination and an interview. 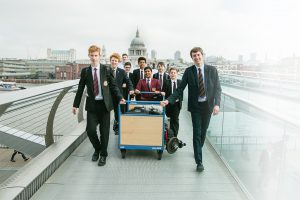 The One Day Film School - Online: 2023 Edition is now available. Mirroring the in-person workshop run in 200+ leading UK schools since 2004, it enables staff to run a hassle-free filmmaking day for Years 6-13 (no experience required). Find out more: http://onedayfilmschool.com

Headington U4s put their filmmaking skills to the test with @1DayFilmSchool last Thursday. The girls spent the day learning techniques in fight choreography, camera work, screenwriting and more! They then put together short 2min films which were premiered at the end of the day!

Entries are open for the ISA #Film and #Animation Competition. Find more details on our website: https://www.isaschools.org.uk/arts/art/film-and-animation-competition.html Kindly sponsored by @YoungFilm

Congratulations to Grace, one of our Deputy Head Girls, who has been selected to be part of an ambitious youth film project from @YoungFilm. Grace will be heading to Sicily in Feb 2023 as part of the production crew for an original short film!

It's been a month since the new @CityofLdnSchool film launched, made by the pupils (with help from us @YoungFilm). It speaks volumes if a school is prepared to put its marketing in pupils' hands - a bit of a gamble, but one that paid off. Well done, boys!
https://youtu.be/4SfQ3kZ12Wc